The article “Korg Electribe ER-1 Rhythm Synth” by @kaossproject (aka Holotropik) was first published on InTheMix.com.au in August 2002.

My first exposure to the Korg Electribes happened 3 years ago when I went into a music store looking for an MC-303/505. I had exhausted myself using Rebirth ’till all hours of the night and had enough cash to outlay and purchase, what I thought, would be the closest thing equivalent to Rebirth in ‘reality’.

I spoke to the guy in the shop about what I wanted to purchase and he led me to a little room off to the side of the shop and showed me all kinds of toys with lights and knobs. Then he said to me, “before you decide on your purchase I want you to have a look at these ‘new’ machines I just got in”. I hesitated a bit as I had my mind set on the MC-505.

He continued, “I’ll plug them in for you and let you play around with them for a while”. I began to think I was being given the ‘hard-sell’ but since he was going to so much trouble I obliged him, anyway it was a good excuse to play more music.

Well, over an hour later I was hooked. This article will be focussed on the ER-1 rhythm synth and will provide an overview of its capabilities and purpose.

Like most synthesizers these days, the Electribes are a multi-function tone module that has both midi functionality (in, thru, & out) and direct stereo sound output. This means that it can be used as a sound module for another midi instrument (such as a keyboard or PC) or as a directly programmable loop-based sound device (similar to the Roland 909 drum machine). For these functions there are midi ports for interface as well as the popular 16-step loop matrix program pads. The main feature to remember is that the ER-1 is not a drum machine; it is a rhythm synthesizer.

I am not about to get into the finer technicalities about the technology that goes into such an instrument, but rather describe its capabilities as they relate to the creative process. After all these type of instruments are produced with cutting edge technology and under the principle of unlimited creative applications. Also, ideally you should take the time out to use a particular instrument to see if it is suited to the type applications you require. Keeping this in mind I can say that the Electribe ER-1 is a very flexible and competent instrument that will provide many avenues for sound production.

To begin with the most noticeable ability that the ER-1 has is that there are four separate parts that can be flexibly ‘modelled’ into sounds. If you have used instruments like this before (including Rebirth etc) you will be familiar with the choice of ‘base-group’ sounds that can be selected for programming into the loop matrix. For example you could choose ‘BD’ (bass drum) and press the required matrix keys to program the sound to trigger at that particular point. This also applies to ‘HH’ (high-hat) etc. However, the ER-1 provides fully adjustable sounds for each of the typical instruments. What initially sounds like a bass drum can be manipulated via the Oscillator controls to sound more like a high-hat or even a keyboard pad.

This is how the Electribe instruments provide their flexibility. The four main parts are fully adjustable synth sound groups (via analogue modelling) that get fed through the OSC section then through the AMP section then through the delay section before final output. Each sound can be treated as a separate entity or overlayed upon another sound to provide additional OSC flexibility. For example, you could build one sound into a bass drum using a sine wave then program another sound over the same matrix position but use a saw-tooth wave with a different pitch. This provides flexibility for sounds to be created using not only one waveform but up to four waveforms. Things can get very experimental very quickly, particularly when working with harmonies.

There are four more sound groups allocated for hat sounds of various origins (via PCM). They are the Crash, Handclap, Open and Closed style typically found on the 909 style machines. These can be modified via pitch, decay, pan and low-boost to produce everything from you traditional percussion sounds to totally insane ride-hats or Techno style scrapes. The hat sounds can be used in combinations together to provide even further experimental sounds, however, these sounds cannot be overlayed like the synth parts as only one sound will output at any given matrix step position (i.e. if two hat sounds are on the same position).

The modelling section of the ER-1, (the ‘knobs’), are divided into three groups. There is the Oscillator, AMP and Delay sections. These sections filter the individual sounds that are programmed into the matrix.

AMP – This section applies typical amplification processing to the sound wave such as Decay, Level, Pan and Low Boost.

Delay – The Delay section provides up to three types of totally flexible cross-feedback delays. There is normal mode, a motion-sequence mode and tempo delay mode. These can be used in conjunction with the swing feature to create varied delay styles that add personality to the sound. For example, it is relatively easy to produce a ‘reverse’ style effect to the output sound similar to what a turntabilist would produce with a backspin on a cross-fade. Another easy effect is a ghost offbeat that can harmonise with other sounds to create a higher amplitude sound.

All sounds are also controlled by the typical mute/un-mute and individual accent control found on most types of drum machines. Additionally, each sound can have a ‘knob-movement’ recorded for it, which provides variety and personality to the sound. For example, a hat sound can have a decay knob movement recorded with it for the duration of the matrix measure to provide a varying length hat sound each time it is sounded on the matrix.

The result is a more dynamic ‘Live‘ sounding part. Very interesting results can be achieved with this technique rather than the ‘static’ sound of your typical drum machine. However, only one knob movement can be recorded per sound. The matrix length can also be varied from 16 steps to 64 steps in either 16th note or 32nd note divisions. There is also the option of running 16th note triplets.

Another interesting feature is the ability for two external sound sources (Line-In MONO x 2) to be programmed into the matrix. The sounds can be modified via the Decay, Level, Pan and Low-Boost of the AMP section. The effect of this process is likened to an appeggiator or sampler of the external source.

The ER-1 comes with 256 different sound sets covering all the main genres Techno, Trance, House, Hip-Hop, DnB and Electro. These sound sets are the basic building blocks for creating purely original loop phrases or sound groups via the onboard processing sections. What is even more important, for the creative process, is that each separate sound can be moved into another sound set to create even more possibilities. For example, if you like the style of bass drum sound in one of the DnB sound sets you can move it into one of the Techno sound sets. Recently, Korg has also released new sound sets that can be dumped into the ER-1 via the midi dump feature to provide ever-evolving sounds for you creative pleasure.

The onboard memory is large enough to store 256 sound sets with all effects and knob movements and up to 16 ‘songs’ with 35,700 events. There is a pattern set feature that allows you to program up to 64 patterns into the matrix pad for quick recall during a ‘Live’ situation.

I would like to propose the following analogy. The ER-1 electribe is like a block of clay. It can be moulded into whatever shape you like (a plate, a bowl or a vase), whereas most drum machines are the plate, cup and vase. Sure they may come in a large variety of colours and shapes but they are always what they were initially. 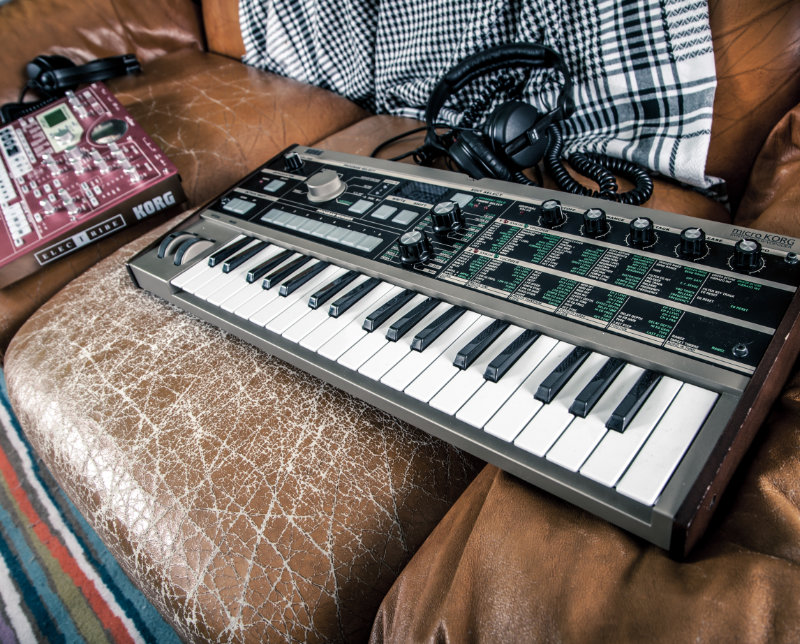